On July 28, WasmEdge 0.10.1 was officially released. This piece is an introduction to the implementation of WebAssembly WASI-NN Proposal in WasmEdge 0.10.1, the first in a series of wasi-nn articles. Our next article will be on the optimization made on WasmEdge for the wasi-nn proposal.

Nowadays AI inference is trendy. From a technical perspective, the regular workflow of AI inference task is loading model, performing inference, and presenting result. This looks like a perfect serverless function, since AI inference has simple inputs and outputs, and no status. As we all know, AI inference is a computationally intensive task. Using WebAssembly and Rust you can implement high-performance AI inference functions, and ensure function safety and cross-platform ease of use with Wasm.

In the latest release, WasmEdge Runtime[1] has implemented WASI-NN[2] proposal, and the backend inference engine supported currently is Intel OpenVINO[3]. A good news is that PyTorch backend will also be supported in the next release; besides, TensorRT and ONNX inference engines are also on our list.

So, how to use this new set of interface specifications to build AI inference tasks based on WebAssembly technology? What does the development process look like? How complex is it? In the rest of this article, we try to answer these questions by demonstrating a simple road segmentation ADAS example. The sample code and relevant artifacts used below can be found and downloaded at this WasmEdge-WASINN-examples repo.

Before demonstration, let's talk a little bit about WASI-NN[4] proposal.

In fact, WASI-NN proposal consists of two parts:WASI is the abbreviation for WebAssembly System Interface. Simply put WASI defined a set of interface specifications to allow WebAssembly to run securely in a non-browser environment with finer-grained permission control; NN stands for Neural Network. Obviously, WASI-NN is an integral part of the WASI interface specification, which is mainly for the machine learning use case.

Currently, stable WASI-NN support is available on the master branch of the WasmEdge Runtime project, covering the five main interfaces defined by the WASI-NN Proposal Phase 2:

These interfaces mainly serve as a pipeline for “intercommunication” between Wasm modules and local system resources. In inference tasks, the data transmission between the front end (Wasm module) and the back end (inference engine) is done through this pipeline. The following figure is a simplified application diagram of the WASI-NN interface of WasmEdge Runtime. In the figure, the WASI-NN interface represented by the green rectangle “binds” the front-end Wasm module with the back-end OpenVINO inference engine. The following example, in its execution inference, achieves a series of tasks such as data interaction and function scheduling between the front and back ends through the built-in WASI-NN interface of WasmEdge Runtime. 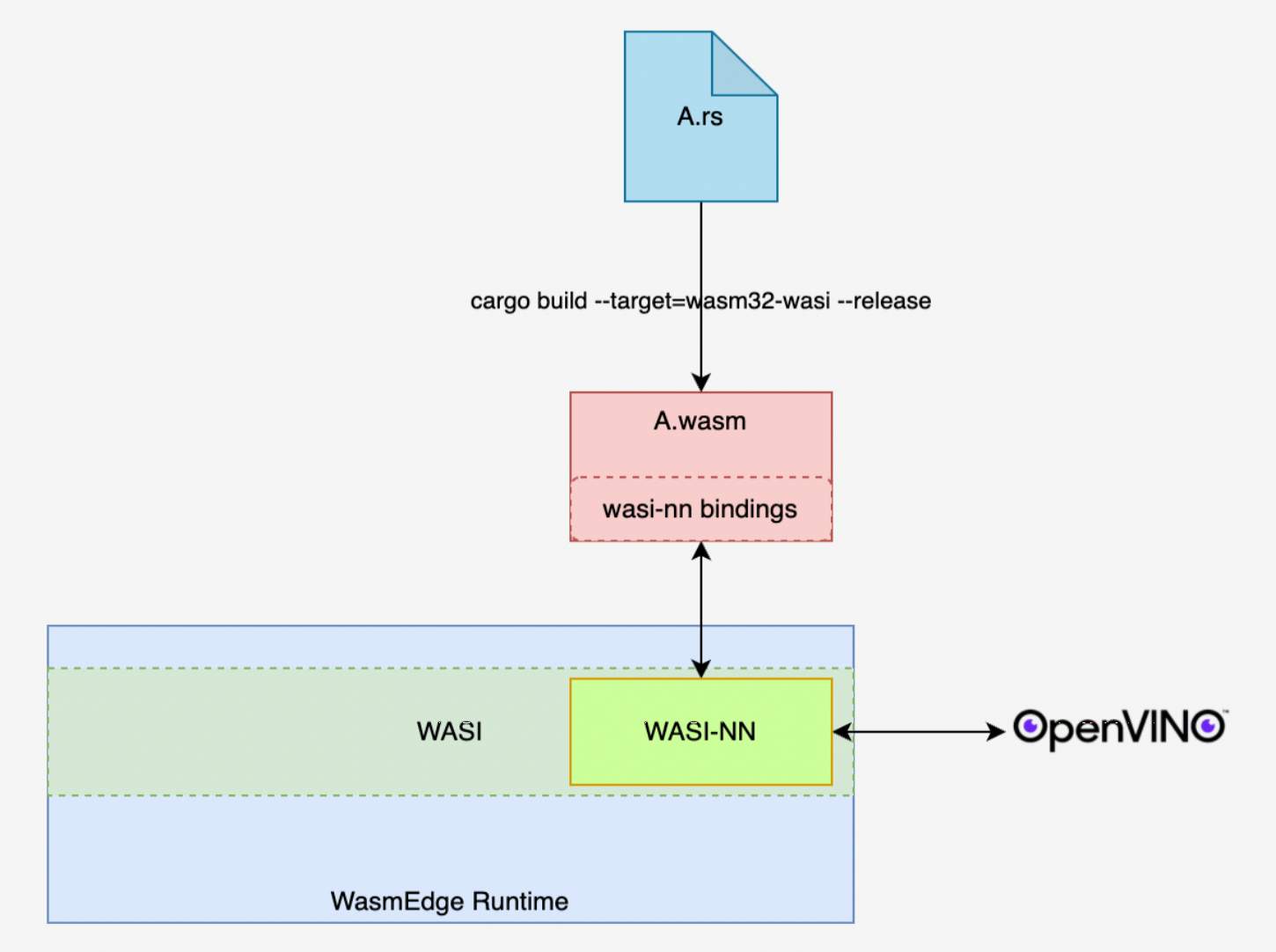 Below, combined with specific examples, let's see how to build a “simple but not simplistic” machine learning inference task based on WasmEdge Runtime.

Before we get started, let's define the process of building machine learning inference tasks using the WASI-NN interface, so as to have a general grasp of the tasks to complete.

Below we describe in detail how to accomplish the above tasks.

Task 1: Preparation of the inference model and input image

In choosing the inference model, for the sake of convenience, we selected road-segmentation-adas-0001 model in Intel's official openvino-model-zoo[5] open source repo. This model is mainly used to complete the task of real-time road segmentation in autonomous driving scenarios. To simplify the scale of the example, we only use pictures as input for this inference task.

It needs to be explained here that the installation of Jupyter Notebook is mainly for two reasons: On the one hand, to use Python, Numpy and OpenCV to visualize data, such as sample images and inference results; On the other hand, through Evcxr plugin for an interactive, lightweight Rust development environment that is great for developing demo code.

Demo project's catalogue structure should be as the following:

According to the notes in the directory structure above, you have a general understanding of this example project. Here are a few to note:

As can be seen from the comments above, these five interface functions constitute a template for completing an inference task using the WASI-NN interface. Because the two wit format files mentioned above only give a “formal” definition of the WASI-NN interface, each programming language can further instantiate these interfaces. In the Rust language community, two Intel engineers Andrew Brown and Brian Jones jointly created the WASI-NN Rust binding: wasi-nn crate. Our example will build an inference module through the interface provided by this crate.

Next, let's take a look at the openvino-road-segmentation-adas-0001 sub-project used to build the inference Wasm module in this example. The following code snippet is the most important part of this project: The inference function.

From the code logic of the infer function body, we can see:

Since our example is to be executed through the command line interface provided by WasmEdge Runtime, we will compile the openvino-road-segmentation-adas-0001 sub-project (where the infer function is located at) to a wasm module. Before you start compiling, make sure that the rustup toolchain has the wasm32-wasi target installed with the command below.

If have not seen wasm32-wasi (installed) in the returned result, it can be installed with the following command:

Now execute the following order and compile to get the inference Wasm module:

If the compilation succeeds, in the ./target/wasm32-wasi/release path, you can find a module named rust-road-segmentation-adas.wasm, i.e. the Wasm module that calls the WASI-NN interface.

According to the entry function of therust-road-segmentation-adas.wasm module, when calling this module via WasmEdge Runtime command line, 3 input should be provided (see the following code comments):

Since we used the model from Intel's official openvino model zoo, the input and output information of the model can be found in the road-segmentation-adas-0001 model page. In addition, the image file cannot be directly used as input, but needs to undergo some preprocessing, such as resizing and RGB to BGR, etc., and then convert it into a byte sequence, so that it can be passed to the backend through the interface provided by the wasi-nn crate inference engine. The *.tensor file above is the binary file that the image file image/empty_road_mapillary.jpg is preprocessed by the image-preprocessor tool. If you want to try to use your own images during the inference, you can get the corresponding *.tensor files in two ways:

After the input file is ready, we can perform inference tasks through the command line tools provided by WasmEdge Runtime.

In order to observe the data before and after the inference process more intuitively, we use Jupyter Notebook to build a simple data visualization tool. The following three pictures are the visualization results of the three parts of the data: The Segmentation picture in the middle is from the inference Wasm module; The left and right pictures are the original picture and the final result picture. The code related to data visualization is defined in visualize_inference_result.ipynb . You can use it as a reference to rewrite to suit your own needs if interested. No further elaboration here. For data visualization, the functionality and convenience provided by the Python ecosystem is much better than the Rust ecosystem.

This article shows how to use the WASI-NN interface provided by WasmEdge Runtime to build a machine learning demo of road segmentation, with a simple example.

From this example, we can see that compared with traditional machine learning methods, building machine learning applications based on WebAssembly technology barely increases the size of the code, and with a small maintenance cost for the additional code. However, on the application side, these small incremental “costs” can help achieve better service performance. For example, in the context of cloud services, WebAssembly can provide a cold start speed 100 times faster than docker, an execution time 10% to 50% less, needing a tiny storage space.

Find more examples here. Now it is your turn to add some awesome wasi-nn examples under cool use cases!