🤖 How to Use Wasm to Add UDFs to the Database

By arcosx, a senior software engineer in charge of Machine Learning platform at Baidu. 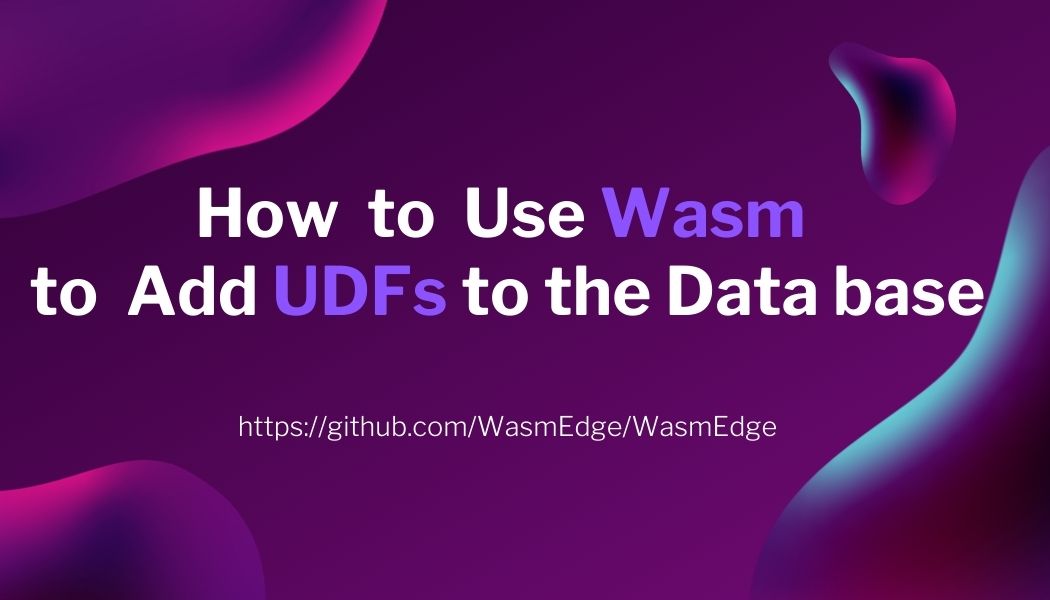 UDF (User-defined function) is the type of function users can customize. In databases, UDF represents a mechanism for extending the capabilities of a database service by adding a function.

Wasm (WebAssembly) is a new format that is portable, small, fast loading, and compatible with the Web. In recent years, Wasm has not only been widely used on the front-end, but has also played an increasingly important role on the server-side. It provides performance close to native code on the server-side without sacrificing security.

In the Nebula Hackathon 2021 held by NebulaGraph, I combined UDF and wasm, implemented the first production-level user-defined function engine for it, and won the best project award. This article is a review aiming to share the vast potential of Wasm as an extension mechanism on the server-side to give the readers fresh perspectives.

Right now, there are a lot of UDF implementations in mainstream databases or data process systems, such as

As a front-end tech, Wasm has long been used extensively on the Web. For example, eBay provides a bar code scanning feature on the Web-based on Wasm. In addition, AutoCAD Web ported its native apps to the Web platform via Wasm.

The application of Wasm on the server-side is on the rise. Many applications are adopting Wasm technology on the server-side. For example, YoMo embeds WasmEdge into the real-time data stream, and then uses WasmEdge for AI inference of data, and also uses Wasm as an extension mechanism. In addition, WasmEdge can also be deployed on serverless platforms with no need for ops, with automatic scalability, and pay as you use.

There are some open-source projects that embed Wasm runtime into applications as an extension mechanism.

It must be mentioned that in the TiDB 2020 Hackathon, the’ or 0=0 or’ team implemented TiDB's user-defined functionx based on Wasm, which is the earliest case of using Wasm in a database, and it is also the source of inspiration for my work in the Nebula Hackathon 2021.

These examples show that Wasm has unlimited potential as an extension mechanism on the server-side.

Before discussing the specific implementation, let's look at the demands based on graph databases’ business attributes and models.

In addition, as a UDF based on a graph database, it should also have the following characteristics.

Although my final choice is to use Wasm as mentioned above, it is necessary to discuss the reason. 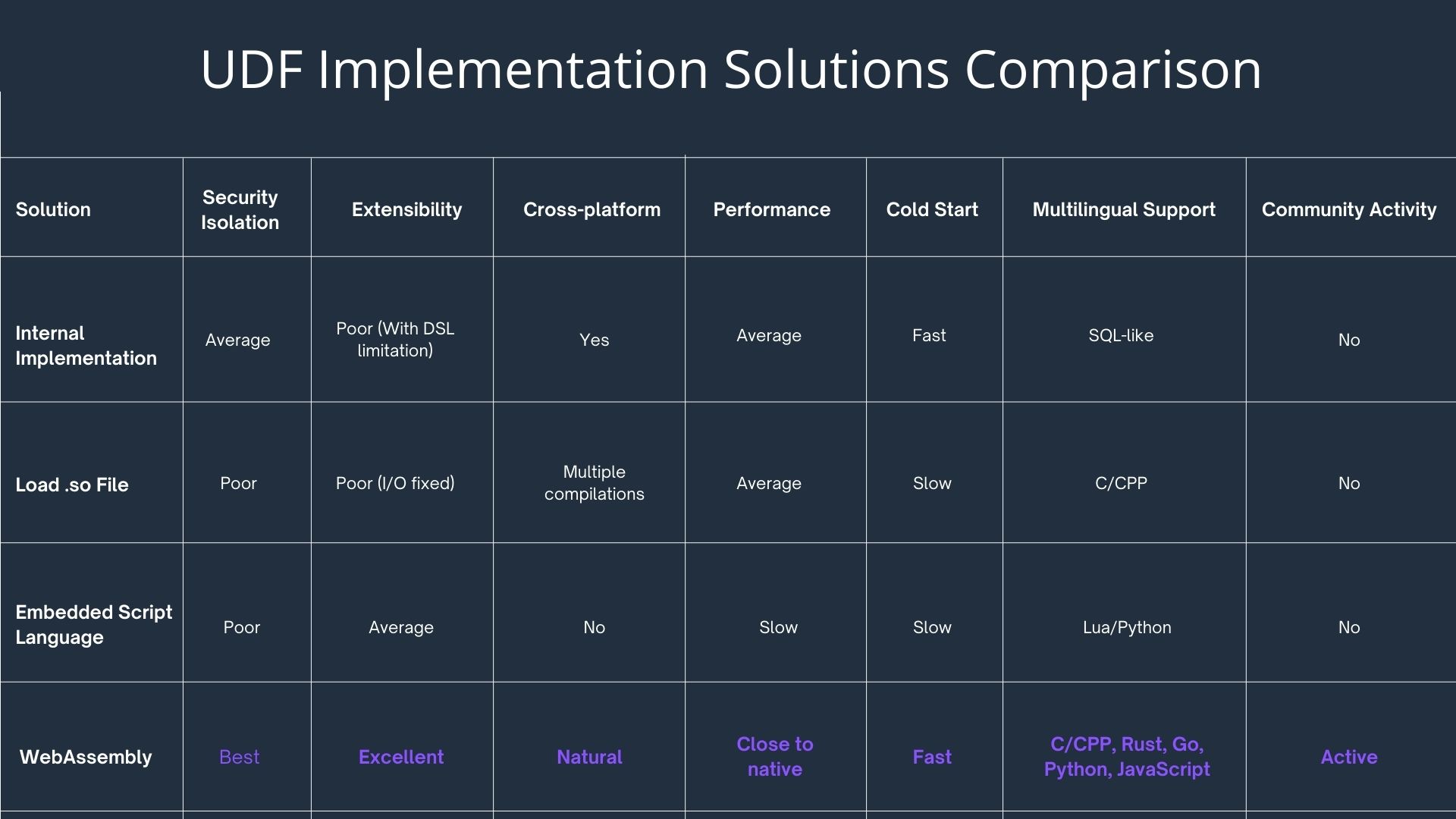 Next, we choose a specific Wasm runtime based on whether it has a complete C++ SDK, performance and size, community activity, whether it is easy to embed, and the documentation. Taking these into consideration, we chose WasmEdge and Wasmtime.

Compilation Toolchain: It works to quickly convert existing code into Wasm. This module is relatively messy, and we use it to develop and debug the Wasm program for the Hackathon Demo.

Parsing: Create functions based on Flex and Bison implementations, and delete SQL statements for functions. The implementation syntax is in the figure below. We consider the two mainstream formats of WebAssembly text format (wat) and Wasm binary files. And its loading methods have two types. The first one is wat base64 encoding, and Wasm binary file base64 encoding, which is convenient for direct input in the terminal, the program with the running size at the KB level can be directly imported. The second is the MB level Wasm Program binary files, which support importing by HTTP address and local file address.

Function Management: Responsible for unified management of Wasm virtual machines, providing dynamic update, loading, and unloading of functions. It can also be said to be the glue for Nebula's other systems and the Wasm extension components.

Here I will not elaborate on the specific implementation in the module. Check out the GitHub code for details.

Below are the two demos for the Hackathon, which show the entire process and the extensibility of Wasm. Demos are based on WasmEdge Runtime. The code is open sourced.

String concatenation program based on WasmEdge

I create a demo showing a very simple string concatenation. This function is not native to the Nebula graph database.

Pass in a string world and return the concatenated string hello world. Note that this extension attempts to pass strings to the Wasm virtual machine, which are not supported by the WebAssembly specification. Here we use the wasm_bindgen tool to compile the Rust program into a Wasm program by mapping the string to the memory address of the virtual machine. You can find the method in the WasmEdge Book or the open source code of the demo.

IM chatbot based on WasmEdge

I also created a demo showing how to send messages from the database to an instant messaging app Lark's chatbot. First, we get the API of a Feishu app chatbot. This API is a HTTP Post request. Next, use WasmEdge's WASI socket to embed the UDF with network request function into the database and execute the function. Finally, you can see that the program requests Feishu to export the content successfully.

Why this demo? The traditional UDF of the database mainly works to customize data aggregation and the storage process, which are essential database business attributes and capabilities. It is more practical to show a Wasm-based plugin mechanism that completely surpasses the traditional UDF of the database in its comprehensive functionalities. Suppose the business system can load Wasm extensions in multiple systems as a Hook (hook) mechanism. In that case, users can add their own Wasm extensions without greatly changing their original business system and achieve various customized functionalities. We may use this to improve the observability of the program. For example, when the database receives a slow query statement, trigger a Hook and send the slow query result to the database administrator via internal IM. I believe there is great potential here.

Reflecting on the Hackathon, I feel that many can be improved. The following discussion is my expectation of what a complete Wasm extension mechanism should have.

More dynamic functions and runtime management and operation mechanisms are not achieved.

Calling Nebula graph database API from inside the Wasm function is not achieved.

Lack of diverse and complex functionalities

Wasm works as a reliable sandbox environment in more extending use cases. The extending plugin code will not cause safety risks for the the applications running above. Although V8, JVM, Lua, and other virtual machines also have the same security capabilities, their performance and size, multi-language support, and scalability are not as good as Wasm.

Although this article mainly discusses the implementation of the graph database UDF, the process applies to any projects that use Wasm as extensions. WebAssembly VM such as WasmEdge and Wasmtime have prepped many low-level executions, saving me a lot of time. Part of the work focuses on the interaction between the host and the Wasm extension, function registration deletion, function call, data transmission, etc. I believe it is effortless to integrate Wasm quickly and extend with Wasm.

The cloud data service by the Nebula graph database in this article or software service represented is a SaaS platform. If SaaS platforms allow user-defined code like UDF to be directly uploaded to the platform, developers do not need to maintain the middle layer that handles callbacks and thus reduce data links, nor manage infrastructure. Also, they can reuse the existing APIs of the SaaS platform, ensuring high security, outstanding performance, and higher scalability.

Join us in the WebAssembly revolution!

👉 Be a contributor: checkout our wish list to start contributing!